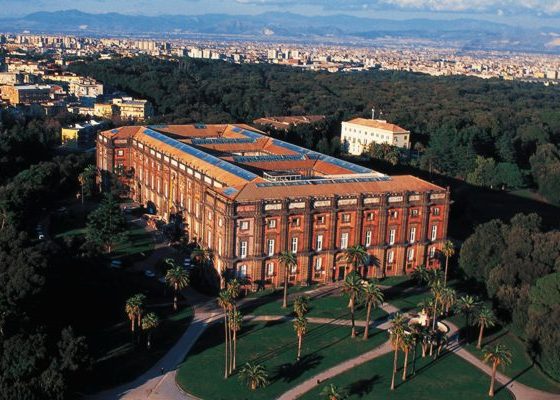 The building was commissioned by the Bourbon king, Charles III, in 1738 as a lavish hunting lodge to house his mother’s – Elisabetta Farnese – art’s collection.

During the decade of French rule (1806-1815) the building became the official residence of Joseph Bonaparte and Joaquin Murat.

Today, the museum is spread over three floors and 160 rooms. The first floor is dominated by the Galleria Farnese (Farnese Gallery) and the Appartamento Reale (Royal Apartment). Here you will find works by some of the best Italian artists such as Bellini, Botticelli, Caravaggio, Masaccio and Titian, and by artists from the Flemish school, such as Pieter Bruegel and Van Dyck. Besides paintings, the gallery holds sculptures and precious tapestries. A highlight is the Galleria delle Porcellane (Porcelain Gallery), where you can find objects and dinner plates from all the royal palaces of Naples, and the famous Capodimonte ceramics created in the local workshops.

The second floor contains the Galleria Napoletana, which displays works by Neapolitan artists from the 13th century to the 19th century, and some spectacular Belgian tapestries.

The third floor is dedicated to temporary exhibitions, contemporary art and photography.

The Parco di Capodimonte – the palace’s 130-hectare park- is the largest patch of greenery in the city, wonderful for a stroll.

The art collections of Capodimonte are available for visits according to the following timetable:

Guided tours of the closed space of the museum will be conducted, except on the first Sunday of every month, according to the following timetable:

Admission is free to exhibits and temporary exhibitions unless there are separate exhibitions and different tickets.

Customers can pay for tickets electronically through POS.