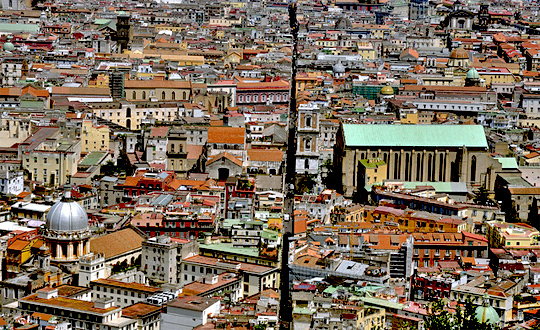 Spaccanapoli is a long street divided into seven sections bearing different names: Via Pasquale Scura, Via Maddaloni, Via Benedetto Croce, Via San Biagio dei Librai, Via Vicaria Vecchia, Via Forcella, and Via Giudecca Vecchia.

It is called Spaccanapoli because it literally cuts through the centre of town. This part of Naples is densely packed with churches (such as the Gesù Nuovo Church, and Santa Chiara Cloister), squares, spires and historic buildings.

There is also a variety of commercial activities: at San Biagio dei Librai an amazing collection of stores sells all kinds of ornaments, bric-a-brac, antiques and old jewelry, while Via San Gregorio Armeno is a famous street where skilled artisans still make presepi (Nativity scenes), figurines, and also caricature figures of the famous throughout the year.

There are numerous souvenir and knick-knack shops selling red horns and other oddball paraphernalia of the superstitious Neapolitans.