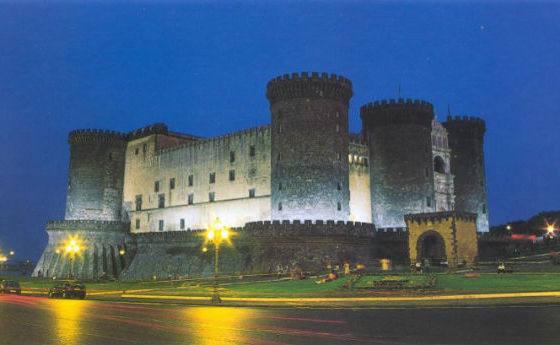 Also known as the Maschio Angioino, it is one of Naples’ landmark sites. This strapping castle was built in the second half of the 13th century on the orders of Charles I of Anjou, who ascended to the throne of Sicily and transferred the capital from Palermo to Naples. It was remodelled by King Alfonso of Aragon in the 15th century.

Within Castel Nuovo it is possible to visit the Cappella Palatina (Palatine Chapel), where a few fragments of Giotto’s original frescoes can still be seen along with some Neapolitan Renaissance sculptures, the Sala dei Baroni (Hall of the Barons), and the Museo Civico (Civic Museum). On the first floor of the museum there are paintings, sculptures and silver crucifixes commissioned by church. More modern paintings are displayed on the second floor. Of particular interest are those depicting historical events of Naples’ past such as the massacre of Altamura, and views of Old Naples.

These are just some things that you can see in one of the icons of the city of Naples.