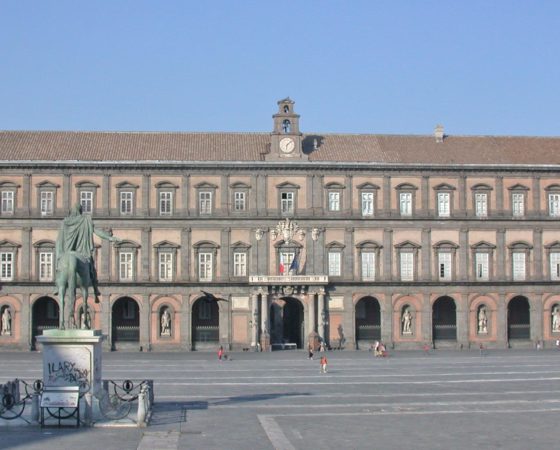 This imposing palace dominates Piazza del Plebiscito. It was designed by the architect Domenico Fontana and built in two years, from 1600 to 1602, for the Spanish king Filippo III. Ironically, he never made it to Naples, and the castle was used by later kings.

The building, as it is seen by today’s tourists, owes its aspect to a series of transformations, modifications and renovations carried out over the centuries, which have left only the façade and the main courtyard unaltered in their original appearance. At the beginning of the 18th century it was restructured and enlarged under the Bourbon King Charles with the help of Luigi Vanvitelli.

The façade of the Royal Palace is decorated with niches containing giant statues of the city’s great kings. From left to right stand Roger the Norman, Frederick II, Charles I of Anjou, Alfonso I of Aragon, Charles V, Charles III of Bourbon, Joaquin Murat, and Vittorio Emanuele II.

Of particular interest inside the palace is the Teatrino di Corte (Court Theatre), a large hall on the first floor, built by Ferdinando Fuga in 1768. It was here that the royal families gathered for plays, concerts and performances.

Among the many highlights is the Sala del trono (Throne room) containing portraits of people who really existed, a ceiling studded with gilded figures representing different parts of the Kingdom of Two Sicilies, as well as a gilded throne.

The palace is furthermore site of the Biblioteca Nazionale (National Library), which is one of the best in the south, with about two million volumes including the famous papyrus manuscripts from Herculaneum.